Lake Edward is the smallest among the African Great Lakes, but its basin includes the highly productive Lake George.

The majority of the population along the lake lack clean water and have poor sanitation. The basin is home to 81 fish species and the lake's productive fisheries employ around 2000 fishers. Two National Parks, Virunga NP and Queen Elizabeth NP) border the lake, making this area a valuable tourism stop. The climate is favorable for many cash crops, but the region is also threatened by high population growth, overuse of resources, declining fish stocks, invasive species, habitat degradation, pollution and climate change. 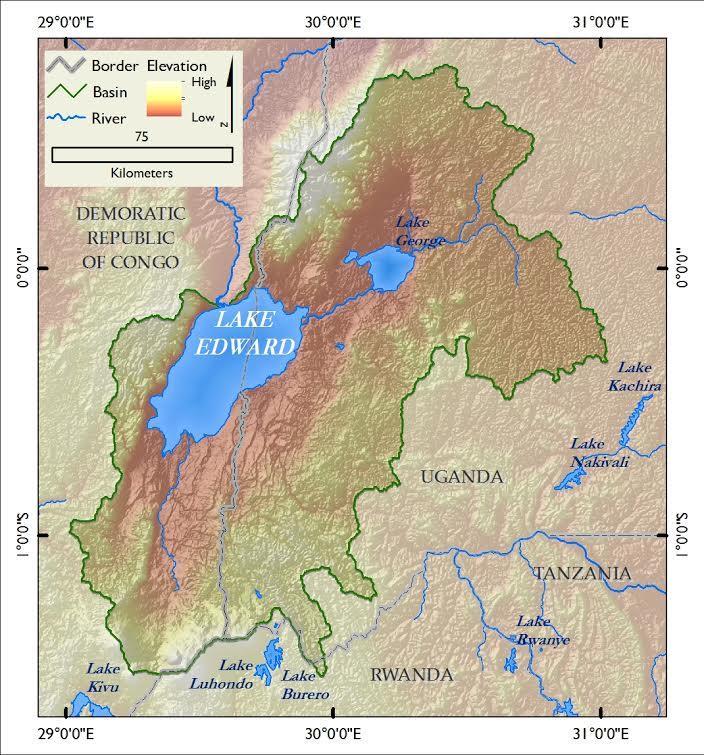 Section under development. Key investments in Lake Edward will be shared here.

Lake Edward is the smallest among the African Great Lakes (AGL) with a surface area of 2,325 km2 but its basin includes the smaller (250 km2) but highly productive Lake George, to which it is connected by the Kazinga channel. The lake covers an area of 12,096 km2 and is shared between Uganda (29%) and DRC (71%). Like other AGL, it originated about 10-12 million years ago. It has a shoreline length of 290 km, is about 77 km long and 40 km wide, with an average depth of 17 m and a maximum depth of 112 m.  Its water volume is about 40 km3, with a residence time of 20 years. The primary rivers flowing directly into Lake Edward are Nyamugasani, Ishasaha, Rutshuru, Rwindi, Ntungwe, and Lubilia, but the lake also receives water from Lake George which receives water from river from the Ruwenzori Mountains. Most of the water flow out of the lake is via the Semliki River to Lake Albert over a series of waterfalls that have prevented in fish migrations between the two water bodies. The climate around the lake is typical of the Abertine Rift, with the areas around the lake having two rainy seasons. The highlands receive more rainfall than the lake itself. The temperature varies between 15 - 21°C.

The population density in some areas within the lake basin in Uganda, such as the Kasese district, is 126 persons per km2. The population growth rate varies between 3.3 and 4.8 percent, and is due mainly to high immigration rates in the region. The majority of the population, particularly in fishing communities, lack clean water and have poor sanitation, resulting in high human mortality from disease. The prevalence of diseases such as HIV, malaria, bilharzia, and cholera are high; in one fishing village in the Lake Edward-George region, 81 percent of the people who underwent HIV testing were HIV/AIDS positive. The literacy level is about 70 percent.

The Lake Edward-George basin harbors approximately 81 fish species, 60 of which are cichlids. 92 percent of these cichlids aren’t found anywhere else in the world. Of the 21 non-cichlids species, about 5 percent are only found in this lake system.  Fish yield in both riparian countries is about 16,900 tonnes per year. The fishery directly employs about 1000 fishers in DRC and 1100 in Uganda. The lake and its surroundings support diverse habitats with high plant and animal biodiversity. Many of the mammals, birds, amphibians and plants are unique to this lake basin. The lake is surrounded by two National parks (Virunga and Queen Elizabeth) within the Albertine conservation area. These, coupled with unique biodiversity and beautiful rift valley scenery, make the land around Lake Edward important for tourism. The lake is also a source of water for domestic uses and is important for climate moderation.

The lake boasts opportunities for high fish harvest and for improving handling and value addition for commercial fish species including Nile Tilapia (Oreochromis niloticus), African Catfish (Clarias gariepinus), Semutundu (Bagrus docmak) and Marbled Lungfish (Protopterus aethiopicus). The potential exists for cage fish farming and salt mining, especially in nearby Lake Katwe. The climate is favorable for cash crops like tea, coffee, cotton, and food crops such as beans, maize and banana. The vegetation around the lake is bushland, thicket, and acacia wooded grassland. The forest reserves around the lake are made of moist semi-deciduous forests, Afromontane forest, ericaceous scrub and high montane moorland.

The high population density and growth rates in the basin are putting increasing pressure on land and water resources. Fish stocks are declining due to increased fishing pressure. Increasing demand for land for settlement and agriculture is accompanied by unsustainable tree cutting and wetland draining, leading to habitat loss and degradation. All of this presents many challenges to the diverse plants and animals in the region. Oil exploration in the Albertine region poses a threat of pollution to the lake, as has been the case with copper mining in Kasese near Lake George. Climate change is worsening the impact of human population growth, conflicts and poverty. Conflicts have occurred over fishery practices and political conflicts have occurred along the Uganda - DRC border. Urbanization is currently not a concern, but is expected to increase with oil exploration.

The Nile Basin Initiative (NBI) is the only regional organization in the basin but is shared with other countries outside the basin and does not have an obligation to coordinate management practices between the two countries. Research, management and community institutions exist but are not well coordinated or run. Projects are in place for addressing biodiversity conservation issues in the Albertine Rift led by organizations including the Albertine Rift Conservation Society (ARCOS) and Worldwide Fund for Nature (WWF).

National policies and regulations, particularly in Uganda, guide development and management of water resources, fisheries, wildlife and tourism. However, there are no clear policy agreements between the countries in the basin. Existing international agreements or mandates for development and conservation of natural resources could be applied to manage the resources.

Fisheries management efforts have mainly included gear size restrictions, licensing and areas closed to fishing, but their implementation, even within the game parks, is still weak and the lake has had limited research and management interventions due to its remoteness. Non-Governmental Organizations and Community-based organizations have undertaken activities designed to reduce habitat loss and degradation and pollution, including planting trees, promoting sustainable land use practices and improving sanitation through Eco-SAN toilets. Vulnerability assessments for the Albertine Rift Valley lakes address biodiversity concerns and promote adaptation. Local funding is limited and hardly any projects have been supported on the lake.

The role of the NBI as a regional institution that can coordinate harmonization of management efforts on the lake must be clarified. Management policies should be created, standardized and implemented. Information should be generated and shared and community participation should be promoted.