Lake Albert is shared between Uganda and the Democratic Republic of Congo (DRC).

Lake Albert's water is mainly controlled by the Nile River. Population density in some parts of the lake basin is as high as 149 people/km2. The population growth rate is also quite high. Many people around the lake lack access to clean drinking water, improved sanitation and improved health facilities. This results in a high prevalence of HIV/AIDS and water related diseases. Lake Albert has a lower fish diversity than other African Great Lakes, but a high fish catch and dependence on fishing for livelihoods. The area around the lake also supports small, subsistence farming. The basin's natural biodiversity and proximity to parks make it important for tourism. Oil and mineral extraction are a possibility in the basin. 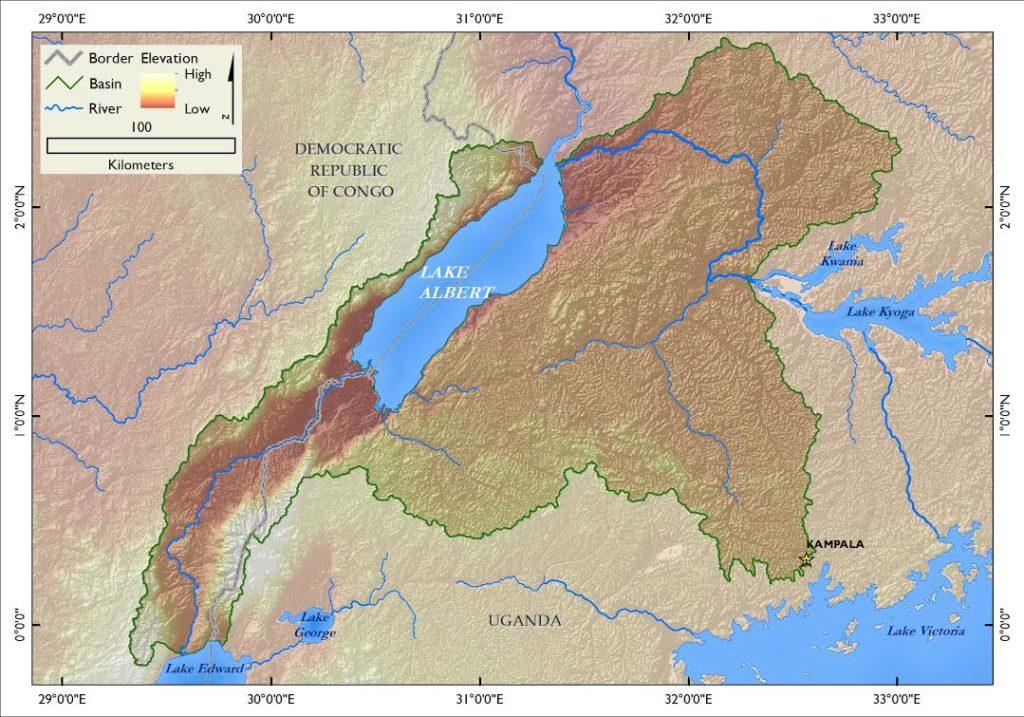 Section under development. Key investments in Lake Albert will be shared here.

Lake Albert is located in the Western Rift Valley at an altitude of 615 meters above sea level. The lake is shared between Uganda (46%) and Democratic Republic of Congo (DRC) (54%). The lake was formed about 10-12 million years ago. It is about 60 km long and 30 km wide, with a surface area of 5,300 km2. It has a shoreline length of 508 km, an average depth of 25 m and maximum depth of 58 m, a water volume of 280 km3 and a basin area of 17,000 km2.  The primary rivers flowing into the lake are the Semliki River from Lake Edward and the Victoria Nile from Lake Victoria through Lake Kyoga. The Albert Nile flows out of the lake. Most of the lake’s water is carried in by the rivers, which contribute about 45,160 m3/year, although rainfall adds around 5,198 m3/year. Water loss is mainly through river outflow (36,875 m3/year) followed by evaporation (13,093m3/year). Rainfall around the lake ranges between 600 mm in the rift floor and 2000 mm in the mountains. Temperature varies with elevation, and ranges from 15-17°C in high altitude areas (>2,000 m). Areas with altitude from 1,500–2,000 m have mean temperatures ranging from 18– 21°C, and in areas with lower altitude, temperature may exceed an average of 21°C.

Population density in some parts of the basin is high with some areas on the Uganda side, such as Hoima district, having a population density of about 149 people/km2. The population growth rate in the area is quite high, between 3.25 and 4.37 percent. Many people around the lake, particularly in fishing communities, do not have access to clean drinking water and improved sanitation, while other social services, such as health facilities, are poor. These conditions result in high incidences of diseases such as HIV/AIDS, which is highest among fishers (around 24 percent). The prevalence of other water related diseases, such as malaria, bilharzia, cholera and diarrhea, among communities along the lake and rivers is also high. However, literacy levels around the lake, particularly on the Ugandan side, are up to 70 percent.

Fish species diversity is low compared to other AGL lakes with high fish biodiversity such as Lake Malawi. The lake harbors between 40 and 55 species of fish species. The cichlid population in the lake consists of six haplochromines and three tilapia species, all of which are restricted to shallow, sheltered, inshore areas, particularly lagoons. 36 percent of them are found only in Lake Albert. Five percent of non-cichlid fish species are also found only in Lake Albert. The local species Lates macrophthalmus (Albert Lates) is on the IUCN Red List of endangered species. The basin supports diverse biodiversity of flora and fauna with locally specific mammals, birds, amphibians, and plants. Most of the shores of the lake are too steep to allow growth of wetlands except for the delta areas where the Victoria Nile and Semliki River enter the lake. Here the shore is characterized with papyrus swamps and fringes of Vossia.

Lake Albert ranks second in fishery yield after Lake Victoria, with an estimated catch of 172,000 tons per year. The lake supports about 15,420 fishers in Uganda and about 20,000 fishers in DRC. The fishery is dominated by two small pelagic fish species Neobola bredoi (51.5%) and Brycinus nurse (33.6%) with large species Lates spp - Nile perch species (5.7%), Hydrocynus forskalli (4.4%), and Oreochromis niloticus (2.1%). The fishery provides employment, income, and quality protein for the basin communities and water for domestic use. There are prospects for cage fish farming with pilot projects testing cage fish farming on the lake. The area around the lake supports subsistence small holder farming as a livelihood activity. Crops grown include beans, maize and bananas for subsistence and income generation. The climate is favorable for cash crops like tea, coffee and cotton and there are opportunities for sustainable agricultural intensification. Lake Albert gained prominence following discovery of oil in the Albertine region and oil exploration in the basin will likely begin soon. The area around the lake is rich in other minerals such as salt, gold, gypsum and coltan. A hydroelectricity dam is under construction at Murchison Falls. The area is important for tourism due to its proximity to parks like the Murchison Falls National Park, other protected areas, unique biodiversity and beautiful rift valley scenery. Like the other AGL, the lake is important for climate moderation.

The high population growth rate is putting increasing pressure on land and water resources, leading to increased land use and land use change and habitat degradation through sedimentation, pollution and eutrophication. Demand for fish has increased, leading to increased levels of overfishing. The lake is highly fished due to poverty, limited alternative livelihood activities, its open access nature and limited enforcement of existing fishing laws. As a result, fish diversity has shifted from large fish species to small fish species, and formerly commercially important species such as moonfish and butterfish are no longer captured while the endemic Albert Lates is endangered. Overuse is also causing reduced catches and reduced fish size. The expanding population around the lake and fishing villages due to the oil prospects is increasing demand for land for settlement and agriculture, which leads to cutting trees and draining wetlands, thus causing further loss of habitats and ecosystem health. Trees are also cut for fire wood and charcoal. Poaching in adjacent biodiversity reserves is also increasing as demand for animal protein has increased.

Pollution from domestic waste and agricultural inputs is contributing to the deterioration of aquatic ecosystem heath in the lake. These wastes add to the already problematic nutrient runoff from agricultural areas to make water quality even worse. The lake experiences eutrophication and consequently the lake is rich in phytoplankton and primary production is high. Blue-green algae (Anabaena) cause anoxic conditions, resulting in considerable mortality of the Nile Perch. The lake is now home to an invasive water hyacinth and, although it has been controlled, it remains a permanent component of the ecosystem. Another invasive weed, the Kariba weed (Salvenia molesta) has spread over Lake Kyoga and is expected to invade Lake Albert.

Oil exploration could lead to negative consequences for biodiversity and ecosystem services if oil spills occur. Urbanization is expected to increase if oil extraction continues and this is likely to cause even further deterioration of the lake, which compared to other rift valley African Great Lakes is relatively shallow. A dam is being constructed at the inflow of the Victoria Nile at Murchison Falls.

Climate change is a threat to the resources in the lake region and is worsening the impact of human population growth, conflicts and poverty. There have already been some conflicts along the common border between Uganda and DRC and these are likely to worsen as urbanization and climate change puts further pressure on resources.

As in Lake Edward, the role of the Nile Basin Initiative (NBI) as a regional institution that can coordinate management measures is not clear. There are national research, management and community institutions but, like Lake Edward, the lake has received limited intervention due to its remoteness from administrative centers of the riparian countries. There have been some efforts from non-governmental organizations such as the Albertine Rift Conservation Society (ARCOS), and Worldwide Fund for Nature (WWF) especially for biodiversity conservation in the Albertine region.  There are also national policies and regulations and international agreements can be applied toward the development and management of natural resources.

Fisheries management has, as for the other lakes, been focused on restricting gear and fish sizes, licensing and closed access but this is complicated by the large number of species requiring different gear. Consequently, these restrictions have been largely unsuccessful and fishing effort has continued to increase.

Water hyacinth was brought under control by mechanical and biological control efforts but the problem of aquatic weeds seems to be growing, which requires regular monitoring. There is need to regulate activities in the catchments which promote sedimentation and nutrient enrichment to reduce eutrophication and pollution through planting trees, developing earthen retaining walls, terracing to control erosion and constructing sanitary facilities at landing sites. Vulnerability assessments have been undertaken for the Albertine Rift Valley lakes to address climate change concerns for biodiversity and promote measures to combat impacts. Key biodiversity hot spots have been identified to better coordinate sustainable use and management.

There is a need to incorporate the potential impacts of dams on aquatic ecosystems in their initial design and construction.

There is a need to form a more robust regional institution to coordinate development and conservation efforts. This should include formulation, harmonization and implementation of policies, generating and sharing management information and promoting community participation at all relevant levels. There is also a need to promote livelihood diversification especially among fishing communities.