Lake Turkana is shallow, but it is the largest permanent desert and alkaline lake in the world.

The lake water comes from river inflows and all water loss in the lake comes from evaporation. The lake's basin is sparsely populated and residents of the lake lack access to potable water, causing high rates of disease prevalence in the basin. These conditions are compounded by low literacy levels and extremely high poverty levels. Fish diversity in Lake Turkana is low when compared to other African Great Lakes, but fisheries in the lake are almost entirely for subsistence purposes and therefore the fish resources in the lake are under-utilized compared with other lakes. Threats to the lake include hydro-electric power and irrigation on the lake's main water source, the Omo River. This has caused habitat degradation, biodiversity loss, pollution and tribal conflicts. Climate change, agriculture, forest clearing and the potential development of oil resources build upon these threats. 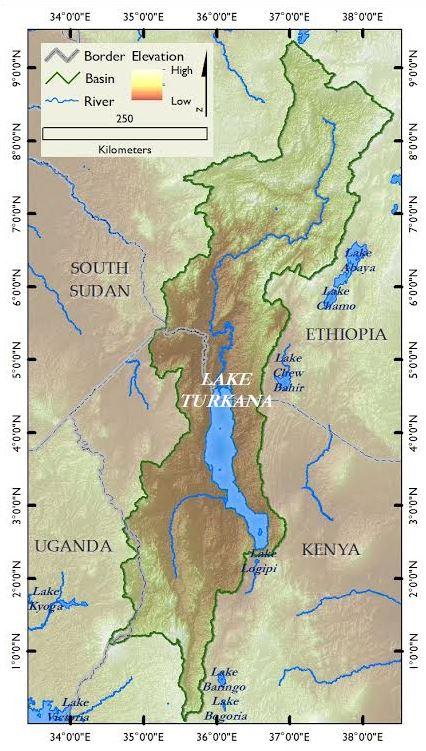 Section under development. Key investments in Lake Turkana will be shared here.

Lake Turkana lies in the Eastern Rift Valley in northern Kenya with its far northern end extending to Ethiopia. The lake was formed about 4.3 million years. The lake extends for 290 km in a north-south direction and has an average width of 32 km. Unlike other rift valley AGLs, such as Malawi, Tanganyika, and Kivu, Lake Turkana is shallow, with a mean depth of 30 m and a maximum depth of 109 m. It is the world's largest permanent desert and alkaline lake with a surface area of 6,405 km2 and a shoreline of 820 km. The lake’s water comes from river inflows, and there is no river outflow, so lake water is lost only through evaporation. Three rivers, including Omo, Turkwel, and Kerio flow into the lake, but only the Omo River is perennial, contributing 90 percent of the inflow or about 19 billion m3 of water each year. The area around the lake is hot and arid, with extended periods of intense daytime winds and low annual rainfall (< 250 mm), usually in March-May. As a result, almost the same amount of water is lost through evaporation. The average temperature in the region is between 28-30 oC. Owing to this climate, the vegetation around the lake is mainly shrub land and desert. Some grassland appears only during the wet period and disappears during drier times. In addition to climate variability and change, the lake is threatened by damming and irrigation in the Omo valley.

The Lake Turkana basin is sparsely populated, with a population density of about six persons/km2. This small population is highly vulnerable to different external pressures. Only 28 percent of households in the Turkana District have access to potable water, and the average distance to the nearest potable water point is 10 km. Data from the 2009 Turkana Central District Ministry of Public Health and Sanitation puts the HIV prevalence rate at 7 percent, with tuberculosis (TB) being one of the leading causes of death among people living with HIV/AIDS. These conditions are compounded by low literacy levels and extremely high poverty levels. People in the basin are among the poorest in Kenya, with 94 percent living below the poverty line and up to 50 percent of the population in some areas relying on food aid.

Unlike other large AGLs, such as Tanganyika, Victoria, and Malawi, with high fish species diversity, Lake Turkana has about 50 fish species of which only 11 are local only to the lake. However, the lake supports over 350 native and migratory bird species and the world’s largest remaining population of the Nile crocodile. There are three national parks (Sibiloi, Central and Southern Islands) which provide the potential for tourism. The lake is a major recreation area, especially for youth, for swimming, sport fishing, and other marine sports.

The Lake Turkana fishery is comprised of the Nile perch, Nile tilapia, and Labeo horie. The fishery directly employs about 3000 fishers and yields about 4000 tons of fish per year, providing high quality animal protein to the population around the lake. Fishing on the lake is still a subsistence activity and does not contribute much to the national economy. Commercial fisheries in the region provide an investment opportunity as fishery resources in the lake seem to be underutilized. The fishery, together with agro-pastoralism, supports livelihoods of about 300,000 Kenyans, from six main tribal groups. The lake’s major water source, the Omo River, supports hydro-electric power generation and rice irrigation in the Omo valley. The area bordering the lake is, for the most part, unsuitable for growing crops which leads to a high dependence on cattle.

The ecosystem services of Lake Turkana are threatened by habitat degradation—especially by damming of the Omo River and irrigation in the Omo Valley, biodiversity loss, pollution, tribal conflicts and climate change. Heavy grazing along the lower Omo valley, especially along watering routes and settlement close to the rivers contributes to pollution by human and livestock waste. These concerns could potentially be heightened by development of oil resources, especially along the western shores of the lake. In addition, about 150,000-200,000 hectares of woodland in southern Ethiopia are cleared annually for wood fuel, exposing soils to strong winds which causes siltation of the lake.

Fluctuations in the ecosystem associated with climate change and human activities within the basin have caused biodiversity loss, especially endangering tiger fish and minnows within the lake. The water balance and fisheries of the lake are highly sensitive to rainfall and drought, and this is expected to worsen with intensification of climate change. This is exacerbated by the use of water for irrigation in the Omo river valley. Construction of a hydropower dam and the large irrigation scheme in the Omo valley are expected to cause a drop in lake level by 20 m since 90 percent of its water comes from the Omo River. The area also has tribal conflicts branded by banditry and livestock rustling. Unlike other AGLs, there is no evidence of decreased viability of fish stocks through use of destructive fishing practices and the lake is believed to be under-utilized. An introduced weed Prosopis juliflora, which toxic to animals and highly invasive, creates dense and impenetrable thickets, making the shores inaccessible, is a threat to the lake.

Lake Turkana resources are directly managed by government ministries/departments/agencies. Like Lake Malawi, there is no regional institution around Lake Turkana to coordinate management interventions across the basin. This puts the burden of coordination and cooperation on stakeholders working on conservation and development in the basin, especially regarding the use of water in the Omo valley, and mechanisms should be put in place to create a regional management institution. Riparian countries have national policies and regulations for the development and management of resources within the basin. The main management challenge is related to management of inflows from the Omo River. Other management issues relate to the management of fisheries and control of invasive weeds. The activities within the lake basin are funded by national governments as well as internationally funded projects, all of which are short-term and not sustainable.

Lake Turkana is the lake that has received least attention among the AGL perhaps because of its remote location. There is therefore a need to stimulate actions on this lake and to network them with national, regional, international, and community efforts, harmonize policies and regulations, develop sustainable funding mechanisms and promote partnerships, increase awareness and improve literacy and human health, and develop economic incentives for livelihood diversification.